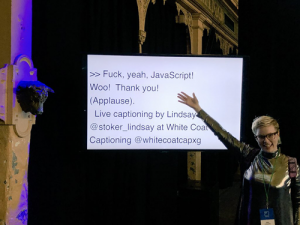 One of the most considerate features of CSS Conf AU and JS Conf AU was the live captioning. There were three large TV screens in the main theatre, displaying live captions of what the speakers and MCs were saying. The captions were provided by Lindsay Stoker of White Coat Captioning. I stole the picture of Unn with the captions from Jonny!

I wish live captioning was more common at large events. Apart from enabling Deaf and hard-of-hearing developers to get the most from the talks, I noticed heaps of other people who were grateful for them too. Some of the reasons I heard or saw in the event hashtags were:

I’m also guessing it was easier for the organisers to provide captions for the videos of the talks too.

So if you’re undecided about paying for live captioning at an event, I hope you’ll decide to go for it. It really does help so many people get maximum value from the speakers you’ve worked so hard to present.